Today I decided to do the warm colour and use the last of my untried OPI Euro Centrale polishes, which I am not sure how they got left this long without being tried. I picked OPI Suzi's Hungary AGAIN! (the pink) and OPI OY-- Another Polish Joke (the gold).

I did two coats of  Suzi's Hungary AGAIN!, and loved the formula, I tend to like thicker formula and that was just how it was. It went on easy, and with one coat it had great coverage, but with two it looks like it does here.  Because I just leave my nails one colour without something I added only one coat of OY-- Another Polish Joke on my ring finger and stamped a butterfly on my thumb using the same polish. Plus nothing reminds me of warm spring days like butterflies fluttering around. I was pretty impressed at how well the butterfly stood out against the pink polish. 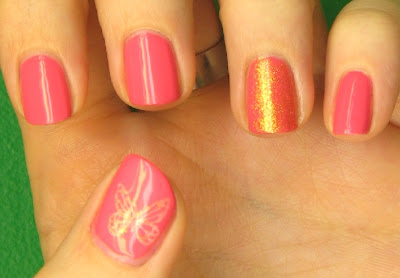 I am finally learning how to get a good close up with my new camera so hopefully my pictures will be a little better from here on out :p

Suzi's Hungary AGAIN! is great for a bright pink, I think it looks much better on than in the bottle which was why it had gone untried until now.

I love the OY-- Another Polish Joke because it shines great when the light is hitting it, but it doesn't overpower the colour under it when it's not picking up light. I am going to have to try it over a black! I already know I'm going to love it. 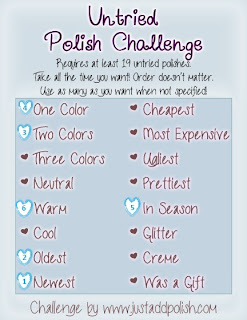 These are the other awesome ladies who are doing the challenge.

If you would like to join in on this challenge check out Just Add Polish for all the rules and information.