I am somehow behind now, so I am going to do a few in the next few days to catch up!

I feel like this one is misleading since I always use ones that cost me a lot right away. So I picked two OPI that I bought in the town I live in, since it's a small town and it's 11.50$ a bottle here. Which is why I normally get them in the city that is actually very nearby for between 5$ and 7.50$. But at the time both of these I loved so much I had to get them right away. I used Kennebunk-Port as the bright red under, which is way more red than it looks in the bottle, and Royal Rajah Ruby for the darker red. 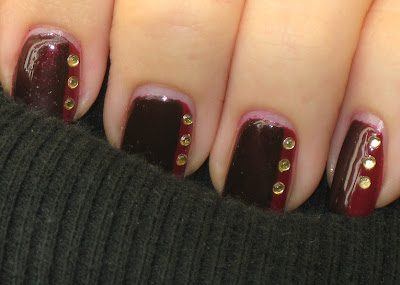 I didn't have huge plans for this, I did one coat of  Kennebunk-Port and man is it a pretty red, I was going to throw on a few gems and be done, but it was actually so much brighter than in the bottle that I felt I needed to darken it down a little for when I'm in class. The formula was amazing and I felt pretty good about my nails with one thick coat. I ended up using the other red that I could actually remember paying full price for which was Royal Rajah Ruby to cover most of it though. 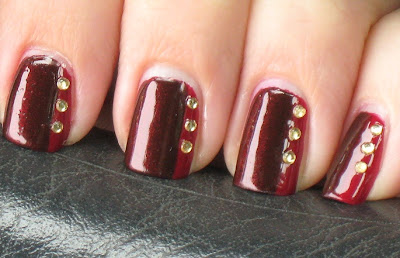 Royal Rajah Ruby is wayyyy more pretty than in the bottle, the red is so deep, and it has a shimmer that you don't really notice that much when you aren't looking at close pictures of it. 95% of the time it looked like the top picture, but when the light catches it you can see that pretty shimmer. I really like gold so I threw a few gems on top just to give it a little extra. 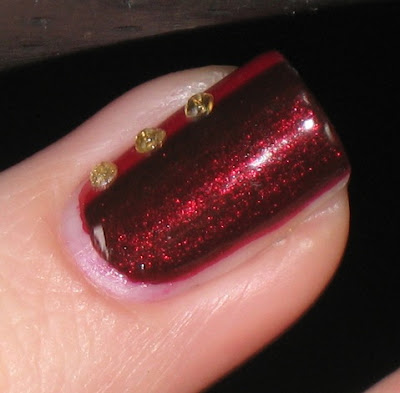 See that awesome shimmer?!? I loved both of these polishes, even if Kennebunk-Port did turn out to be a really vampy red. That means I will just use it on days off rather than on days I am teaching class. I would recommend both of these colours if you like reds, they both treated me so nice. 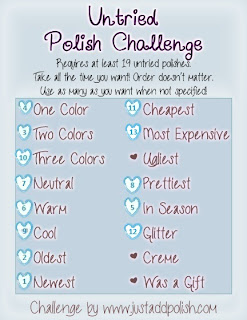 These are the other awesome people who are doing the challenge.

If you would like to join in on this challenge check out Jonochi at Just Add Polish for all the rules and information.