It's the first of the month so I treated myself and got OPI Chic From Ears To Tail!

And then I got home and binge bought a bunch of indie polishes. So I am looking forward to that later this month.

Chic From Ears To Tail is from the The Couture de Minnie line and is a lovely bright pink. It reminds me of bubblegum, and as I am a huge fan of pink I had to pick it up. Now that I am home I am wishing I got the rest!

I will say it has a creme finish, but there is a little bit of pink and silver shimmer hiding in there so well that 99.9% of the time you won't be seeing it. You can see it in the bottle, but once it's on you have to catch the right light for it to show. 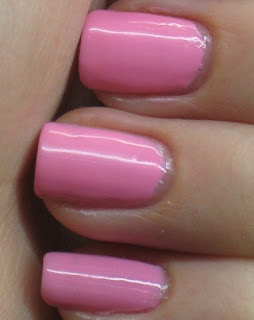 Since I was quickly losing light I took a picture outside with no cleanup so that you could see how lovely it is.   I used two coats, and the application was a little more streaky than I am used to from OPI, even with pastels. Although it did self correct for the most part so any parts that the streaky-ness (that's a word really!) effected ended up self correcting. I will do a proper swatch later on this week, I just was too excited right now to stop. 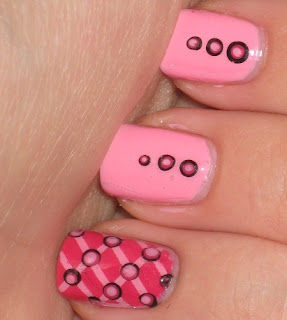 I goofed around with it after while watching the new Arrested Development, but it was too dark by the time I finished that I only got pre-cleanup pictures in natural light. I put You're A Pisa Work over top, and a few dots of GOSH Nero.

I do love the colour and the hidden shimmer that only sometimes comes out to play, which I think is really great about this polish. Although I might put some polish thinner in my bottle a little later to make it more manageable. It's pretty opaque, and really could use it. It may not be the best application, but I would still say it's worth getting if you don't have a pink like it!