So I went away for a while and I had to pick nails to go with my clothing, but instead I decided to paint my nail with Dollish Polish - Space the Final Frontier.

I picked it up because it was a Star Trek Polish, on a night where I pretty much bought every Star Trek polish I could find on line, but I was really disappointed with it. Not because it's not pretty, I love how it looks, but because I didn't feel any connection between it and Star Trek. Was it can't have been named for the colour. Because the warp nacelles only have red and blue, so it's not like it was referring to the colours on the ship. The closest I could think that is green is the Romulans. Unless they think it looks like stars, which I am not really feeling either. So don't buy it because it's a Star Trek polish, buy it only for the colour. 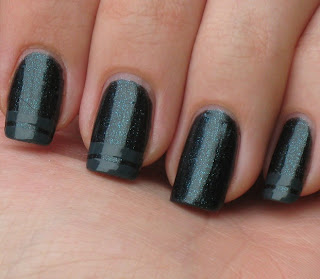 Now that I got my disappointment in it out of the way I want to tell you how lovely it is, and how much I would actually recommend it. It is a pretty duo-chrome of teal-green and purple set into a black base. I used Butter London Stag Do on the tips with striping tape so control the strips. Also that is only two coats of Space the Final Frontier, so it is nice and opaque, although with one coat it looks streaky so it is a two coater for sure. At two coats it is perfection. 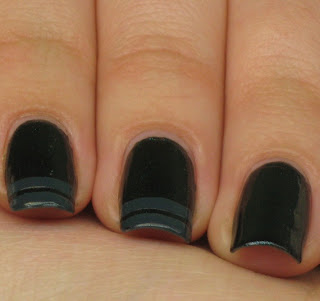 When there is no light reflecting on the sparkles it looks almost like a pure black polish. I tilted just so that I could get a good picture of it. Also I think Stag Do really stands out here, although the bottle had shimmer in it, I never have ever seen it when I put it on my nails unless it's like the highest light ever. 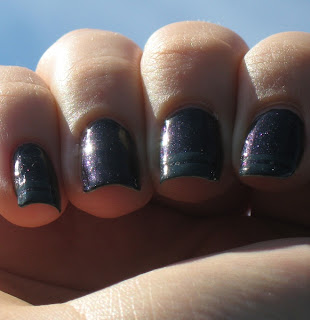 I didn't have my normal lights because I was on vacation, but on day three of this polish I got this picture where you can actually see the purple for once. Pretty. 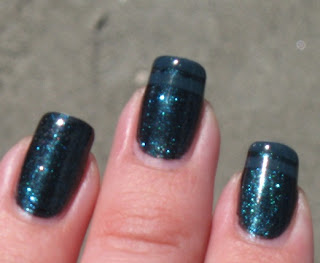 I like this out of focus picture because it shows how well the polish shines in the light! It is very pretty, although I am not 100% fan of the brush that comes with this polish. It was okay, but it's not the super easy to use type of brush I like. I would recommend this polish for it's colour and it's formula, but not for having anything to do with Star Trek. Although I am still in love with it.

Edit: Just wanted to add the Star trek Polish dries a little tiny bit matte, not super matte, but less than if you have a good top coat on it. So you would probably want to throw a top coat on for sure.