Since I teach ESL I often feel like Canada Day is the most special day of the year, it's when we celebrate what it is to be Canadian and it's when immigrants get to see some fun traditions.

Also who can complain about beer and fireworks!

I didn't want to do just the Canadian flag since I feel that there is so much more to it. So I picked to do one white cross to represent the English speakers of Canada and a red one for the French. Why you might ask!? 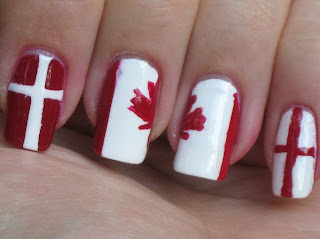 "In the First Crusade Bohemund I, a Norman lord, had red crosses cut from his mantles and distributed to the 10,000 crusaders, who wore them as a distinctive badge on their garments.

In subsequent crusades, each nation was distinguished by a cross of a different colour. France long had a red cross on its banners while England used a white cross. In the course of history, red and white alternated as the national colours of France and England. 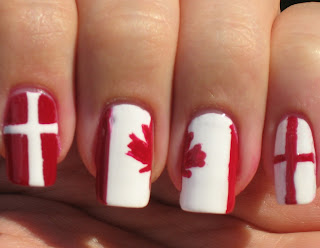 I freehanded the stripes which is why they are a little wokey, but I am over-all happy with how it turned out. I used OPI Alpine Snow for the white, two coats for the base, and used a brush to pain on the stripes and the leaf. On my pointer I used two coats of OPI Kennebunk-Port for my red background and was totally pleased at how well Alpine snow painted over red. 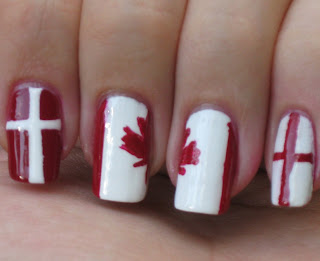 Any way, I am posting this instead of my vacation nails (I totally bought 9 new polishes while I was away) and I will put them up when I get a chance.